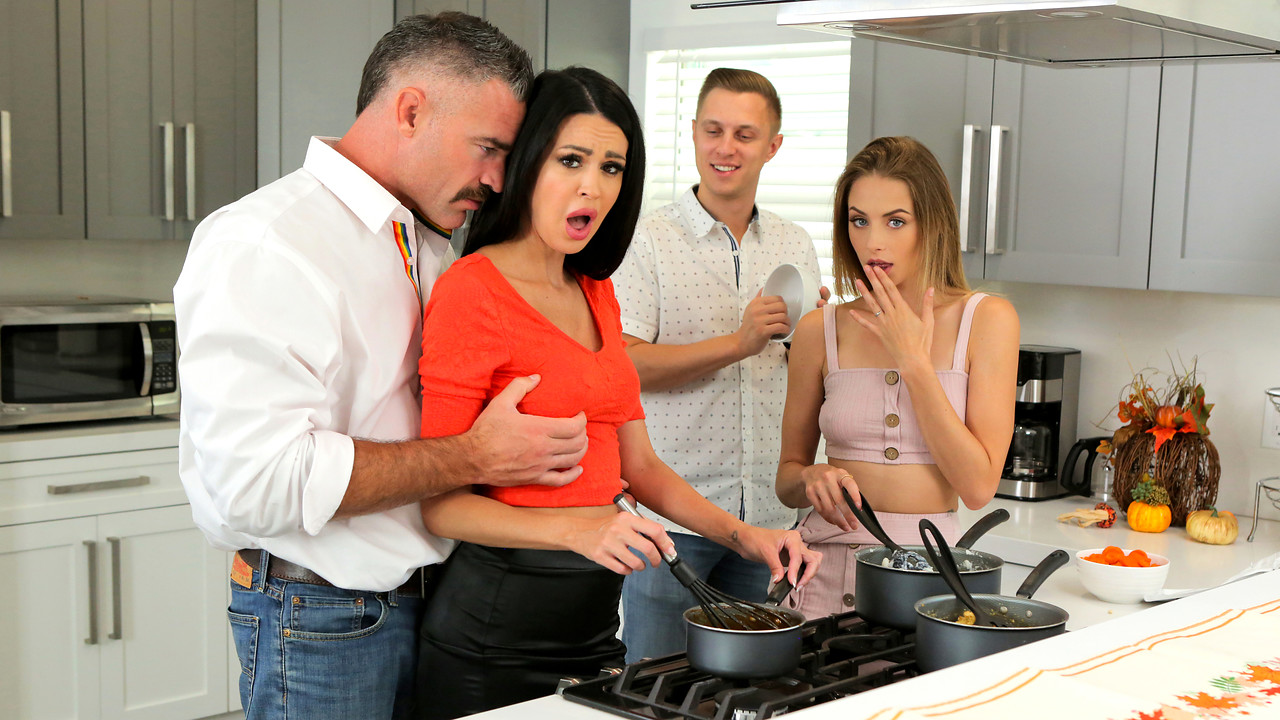 Описание: What would happen if four families each contributed one member to create a new family? In this episode of Family Swap, Kyler Quinn and her swap mom Jamie Michelle are cooking Thanksgiving together. Charles Dera and his swap son, Alex Mack, are helping out by doing the dishes together. Everything is going great until Charles comes up and starts feeling up Jamie in front of everyone. Jamie rebuffs Charles by saying that they re supposed to be paying respect to the pilgrims and exhibiting good family values. Later, when they re all seated around the table, the swap family starts exchanging raunchy jokes. Everyone finds it funny except Jamie, who gets increasingly upset.

When Kyler starts making comments about moist meat, Jamie has had enough. Getting to her feet, she hikes up her miniskirt and shoves Charles s face into her pussy so he can experience something really moist. Alex tries to deescalate the situation and in response, Jamie whips out her tits and tells him to get over here for some breast meat. When Kyler speaks up next, she gets her face shoved to the other breast. Then Jamie orders everyone to the living room so she can whip Charles s hardon out and sink down onto it for a stiffie ride. She announced that they all wanted to ruin Thanksgiving as she starts riding. It turns out that watching their swap parents fuck is a total turn on for Kyler and Alex, so soon enough Kyler has popped Alex s cock out to start sucking him off right there in the living room. That only encourages Jamie to climb off of Charles and slurp her own juices off of him even as Kyler pushes Alex down to enjoy him in a reverse cowgirl ride of her own.

Since they ve all found some common ground together, the swap family goes for a partner swap where Kyler gets to try out Charles s cock and Jamie gets to try out Alex s. Laying back to back on the couch, the girls spread themselves wide open so their partners can dive balls deep into their tight cooches. Then they swap back so that Charles can fuck Jamie from behind and Alex can give to Kyler in doggy. The men rise to the occasion, pumping harder and faster as the girls keep begging for more. Alex is the first to lose it, filling his swap sister up with a big creampie. Charles follows Alex s example a moment later as he gluts Jamie s pussy with his own pop. The girls begin talking about having cream pies for dessert, but the guys are more interested in football now that they ve both been able to bust a nut.